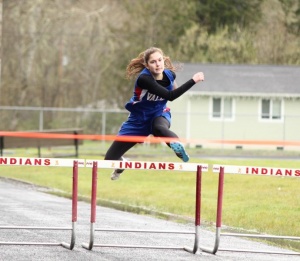 Photo by Scot Perason...Valley's Lauren Friese won two events at the tri-meet, including the pole vault and 300 hurdles.

SOUTH BEND – Raymond won another Tri-District meet against Willapa Valley and South Bend to retain its hold on the Henrie-Weisel Tri-District traveling trophy. The trophy is titled so in memory of venerable coaching icons Jim Henrie of Raymond and Willapa Valley, and Don Weisel of South Bend. It marks the third straight tri-meet win for the Seagulls under Mike Tully.

The competition was conducted at the Don Weisel Oval (Millam Field) in South Bend.

“I was very pleased with the way the team performed at Thursday's Tri-District Meet,” Raymond HS Head Track and Field Coach Mike Tully told the Herald. “Our depth in a wide variety of events on the boys side allowed us to pull away for a comfortable victory on the boys side, as well as the combined score.

“Alex Vaca was our lone double winner for the boys with his victories in the 800 and 1600,” Tully pointed out. “Terry Broten had an excellent day, winning the 110 hurdles and placing second in his other three events. Terry has been running very well so far this season. Kason Koski picked up a PR and a win in the high jump with a leap of 5-8. Our shot put crew, led by James Hamilton, had an excellent day in very difficult conditions.”

Aaron deMontigney was first in the 3200 meters, and Hunter Borden won the 300-meter intermediate hurdles. Winning the discus was Ally Phansisay.

The Seagulls also took first place in both relay races. Running for the Gulls in the 4 by 100 were Alex Sida, Borden, Neal Riley and Elliott Murdock. Taking the tape first in the 1600 meters were Hamilton, Borden, Vaca and Murdock.

“On the girls side, Hannah Dykes had an excellent day with wins and season bests in the 100, long jump, and triple jump,” Tully said. “While the girls didn't win many events, they scored a number of second and third-place finishes in order to finish second behind Valley.”

“Overall, it was a good early season test for us,” Tully added. “Hopefully we'll continue to work hard and improve as the season goes on.”

Willapa Valley won the girls' portion of the meet.

“Both our boys and girls team competed very well,” Willapa Valley HS Head Track and Field Coach Dave Ege told the Herald. “It wasn't exactly good track weather but we had some good performances. Matt Konigsberger took four firsts in the 100, 200, 400, and javelin.” Trevor Cook won the pole vault for the Vikes.

“Sarah Chapman had PR in the shot at 30 feet, 10 inches, and Jessica Cook came from behind to win the 800 meters,” Ege added.

The Lady Indians also won two relay races, including the 4 by 200 with Morgan Patterson, Alison Funkhouser, Sanchez and Russell, and the 1600 with Jennifer Byrd, Tessa Wilson, Ashley Pearson and Traci Hoffman.

Dennis Johnson won both the long jump and triple jump for the Indians.