Snow arrived in the Pacific Northwest 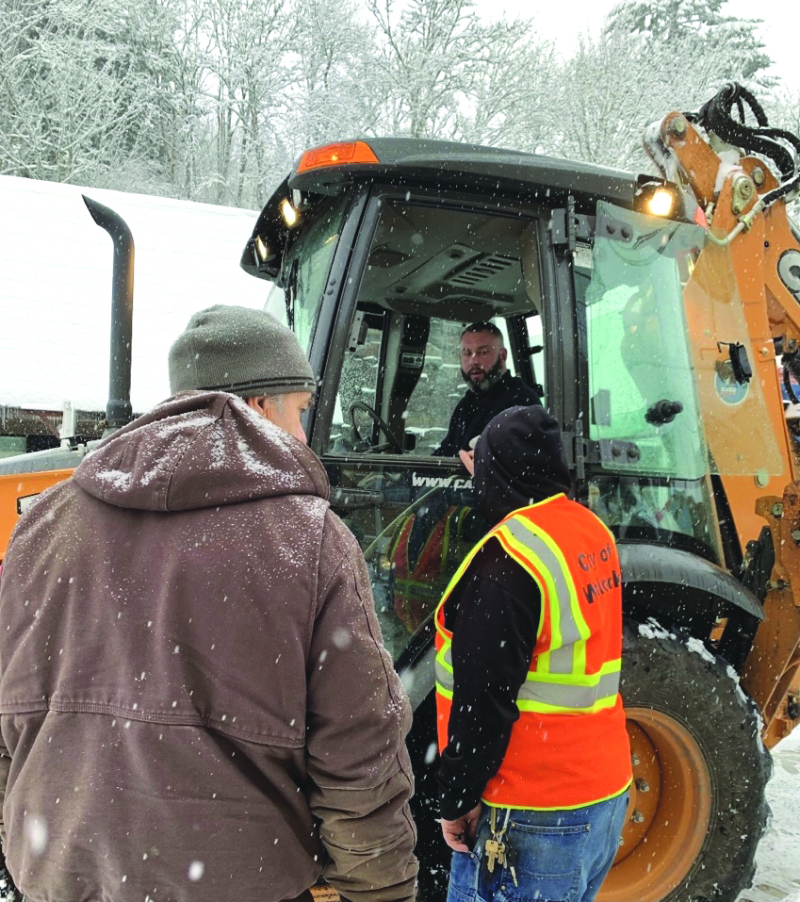 Photo courtesy of the City of Winlock - Winlock Mayor Brandon Svenson plowing the streets in a backhoe.

The snow arrived in the area starting on Thursday, February 11, and it didn't stop for days. Starting on Thursday, Lewis County saw flurries of snow. It didn't stick enough to cause a lot of damage Thursday, but we kept hearing snow accumulation was on the way. Friday was the day "snowmageddon" began and by Saturday, we were all stuck at home with some homes having a foot of snow or more and no electricity.

Thursday, we saw the snow falling, but the accumulation was not until the evening, we were out and about getting ready for the storm. As we all ran into the grocery stores to stock up, we were all talking about the impending doom that was headed our way. Why is it when a storm is brewing, we feel the need to stock up on everything for days? I have never figured out why we need a month of toilet paper for 5 days of storms. The thing to remember, we are Lewis County residents, we can survive anything. By Thursday evening, we knew we were in for a whopper of a storm. It was then that we were saying, "it won't stop."

Friday morning we woke to snow, not just a dusting, but snow that made you want to stay home. Most were stuck at home and students were remote learning, something they have learned during the pandemic. There were few on the roads as they were iced over. The freeways and roads were not the place to be, but some had no choice. While some were on the roads, many were home contemplating how long they were going to be stuck. And the snow, "it won't stop".

In the City of Winlock, there was so much snow that Mayor Brandon Svenson hopped on a backhoe and plowed the streets. The snow continued all night as did sightings of Mayor Svenson, he was helping people get out of the snow when their vehicles were stuck.

Friday evening a few residents in the Toledo and Winlock area lost power, but we had no idea what we were going to wake up to. Saturday morning we woke to even more snow. My little Pekingnese thought he would fly off the front porch steps, headfirst into the snow. It was then that he discovered the snow was taller than he was. Needless to say, shoveling then occurred. Several pictures on Facebook showed the same problem for many small dog owners, the snow was taller than their fur babies. And the snow, "it won't stop."

After a bit on Saturday, we all lost power, it seemed as though most of Lewis County had lost electricity. Bonneville Power Administration had a transfer issue and we were all without power. Saturday was a few hours of firing up the woodstove, making camper coffee (few grounds never hurt anyone they say!) and shoveling snow off the walkways. The snow continued for the day and now we knew it was time for it to stop, but it didn't, it wouldn't, it just kept on coming for hours, and the snow "it won't stop."

Finally, we saw it stop and warm up. Then, the sun went down and again it started to snow. It was now at the point where we didn't think it was ever going to stop. We woke up to it snowing, it has snowed for 4 days. And the snow, "it won't stop."

Then the reality set in, after all this snow finally stops and it melts, we will need kayaks. The melting of the snow will be interesting to say the least. If it melts slowly, we should be able to absorb it through the ground. If it melts quickly, we are in for quite a bit of water. If you see people out and about in a canoe or kayak, you will know it melted just a little too fast.