Summer arrives with a bang 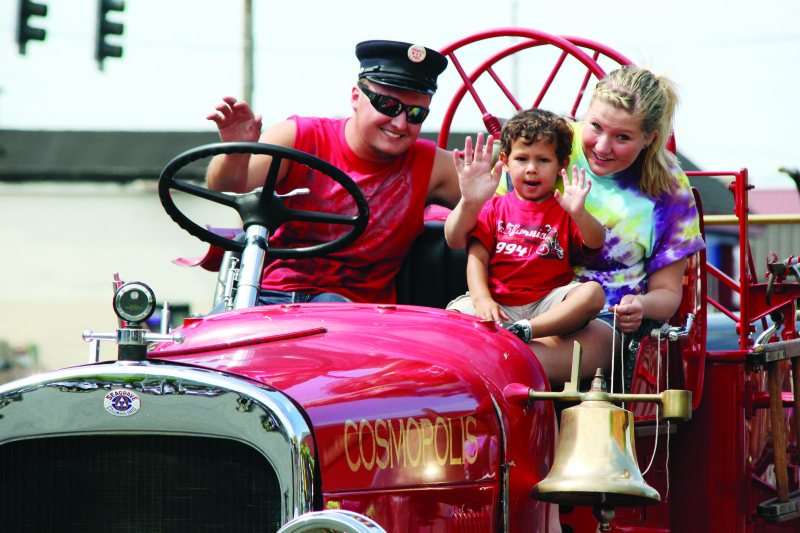 Members of the Cosmopolis Fire Department Family take part in the Founders Day Parade and show off one of the antique fire engines that was a part of their history. Photo by Scot Pearson

The summer has arrived and with it many communities are holding street parades, festivals and celebrations highlighting what makes their community special.

This past week we saw Founder's Day in Aberdeen, the Sun and Sawdust Festival in Ocean Shores, Pirate Daze in Westport, Spody Fest and A.B.A.T.E held a fundraiser and Seabrook opened up with Savor Seabrook, and many more around Grays Harbor County will be cropping up.

As the streets filled with supporters of Founders Day along Market Street in Aberdeen, the A.B.A.T.E poker run skirted around the edge of the festivities in and out of town to end up at 29 Camp Road in Montesano to start their biker games and listen to the several bands that had already blown away the stage the previous night.

"We joined together for this A.B.A.T.E./Spody Fest this year to raise money and awareness for the Wounded Warrior Project and our friend Doug George," said Cliff Heckard a.k.a. DJ Spody.

Arriving back at camp, riders had completed their five stop poker run taking them along Blue Slough Road and started right in with special games designed for those on two motorized wheels. Riders along with passengers took part in several games that test their skills at riding a motorcycle and challenged them to ride the length of a plank, or toss a ring onto a cone while passing by, the distance gets further away as they go down the course. There was even a game without bikes were a couple had to dress, girls in guy clothes and guys in girl clothes, and have the guy jump through a mock window to run away. It was all in good fun as people enjoyed the love of motorcycles and camping to raise money for charity.

"We started Friday night and had several bands playing. We had raised just over $800 and the real fundraising had not even started," said DJ Spody.

"People still do not understand that A.B.A.T.E. is an organization with chapters in all 50 states and the United Kingdom. In Washington State alone there is 20 chapters of A.B.A.T.E.," said Don Florek of A.B.A.T.E.

"I have a list of laws that we have helped influence over the past six years," said Florek.

The Grays Harbor Chapter of A.B.A.T.E has been growing since the late 1970's and continues to impact the laws that govern rules of the road for motorcycle riders. When they get together they also raise money for charities like cystic fibrosis.

The event almost did not happen as the park where the event has happened in the past years was recently taken over by Grays Harbor County. Once run by the Elks, days prior to the event organizers were contacted that the county was taking over responsibility of the park and events like Spody Fest or the A.B.A.T.E Flat Mattress Run would not be allowed.

"The Grays Harbor Commissioners, all of them, Frank, Vickie and Wes got with me and said that they wanted the event to happen," tells Heckard.

With the Elks no longer running the park, they also came to claim a few of upgrades that they had made over the years and items like fire pits and kitchen items were taken away just before the start of the A.B.A.T.E/Spody Fest.

"It was Wes Cormier who dug into his own wallet and helped pay for the permitting for the event," said Heckard.

The future of the Camp Road Park is yet to be seen, but it is understood that a grant has been secured to help renovate the park into a day camp for Grays Harbor County and it will be re-named Twin Bridges Park.

This year during Founder's Day the parade was kicked off by the singing of the National Anthem by the Aberdeen High School's Goldenairs and featured a King of the Parade Joshua Francy.

Francy was recognized for his efforts with Clean Streams a one-man operation to keep the waterways in and around Aberdeen clean from litter.

Thank you all for having me as the King of this year's Aberdeen Founders' Day Parade & Festival. I am truly honored. It was the first time I had been in a parade.

I had a great time. It is great to know that the community truly appreciates my work with Clean Streams and Memes. I like to lead by example so I cleaned up most of the parade route after the floats had gone," said Francy on his Facebook page.

The People's Choice Award for an entry in the parade went to the Mazatlan Dancing Horses who were accompanied by Banda MX out of Tacoma, it was a lively display and well worth the award. A-1 Roofing, who put on a roof as they rode the parade route, was bestowed a new honor from the Greater Grays Harbor Ambassadors select8ng them as the business with the "Best Branding".

Aberdeen City Council member Jeff Cook took one for the team and fell 53 times in the dunk tank to raise over $284 f the Aberdeen Bobcat Music Boosters. And during the Dinner Theater Ken and Susan Rush of Quilt Harbor won the Best Dressed Honor.