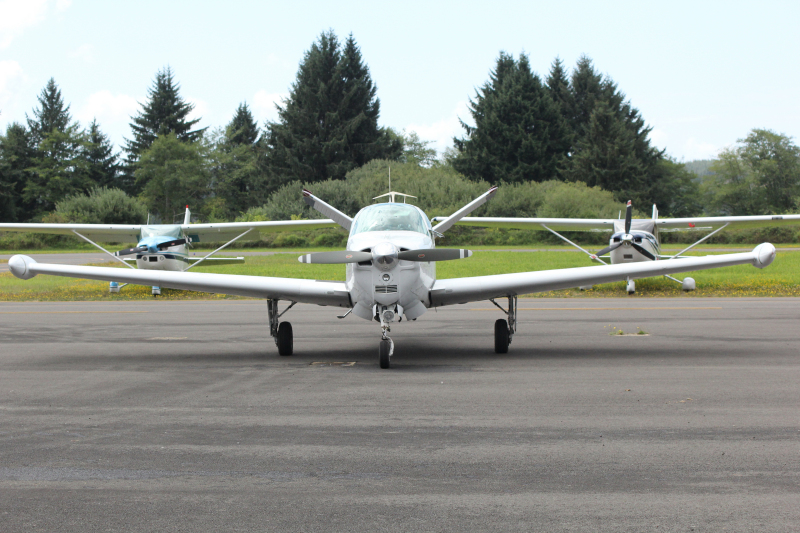 Planes are staged during the Oyster Fly-in earlier this year.

The August 15 fly-in brought pilots from as far as Prescott, Arizona. John Bauer and his copilot wife Margie won the large professional pilots log book for flying the farthest for succulent Willapa Bay oysters. Their experimental 1994 "Long EZ" Canard Pusher aircraft attracted much attention from others attending the fly-in.

One couple from Burien, Wash. proudly pointed out that they've attended all six of the fly-ins. One year because of poor flying conditions they "flew" down to Raymond in their car. They said they enjoy camaraderie with aviation buffs as well as the fresh oysters.

Making it all possible is volunteer help from Mike and Marcie Walden and their 4-H team from the Livestock Market project. The Raymond Catholic church provides chairs and tables that are set up in the hangar. Chris Fosse from South Bend Boat, LLC provided the transportation for 50 chairs and eight tables to and from the Church. Shane Moncy with Coastline Roofing Systems donated use of his golf cart for greeting incoming aircraft and providing "follow me" guidance to parking. Dr. Ken Olson's brother Jim for the sixth year brought a well-equipped mobile kitchen from Enumclaw. And Jim brought his father as the official supervisor of chefs. Regular fly-in volunteer Mickey Kendall was indispensible.

WHPA President Jerry Gould told the Willapa Harbor Herald, "It's gratifying to see our fly-in increasingly gain substantial support both from local residents and the region's aviation community." Gould pointed out that the fly-in could not happen without support from the Port of Willapa Harbor, owner of the airport.

Gould also cited John and Heidi Payne and their son Richard for their valuable help getting everything ready for the fly-in. Their home is located on the airport. Gould added, "John, Heidi and Richard's presence at the airport precludes vandalism throughout the year."