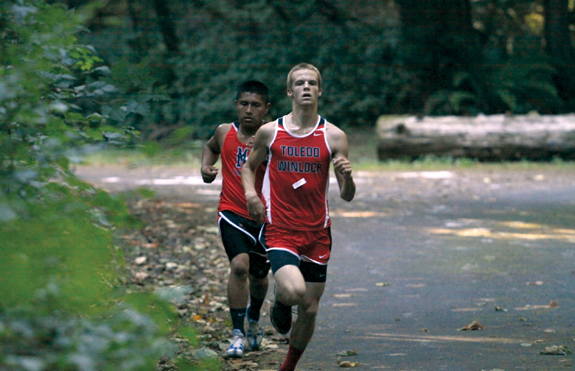 Toledo's Forrest Wallace (foreground) leads a Mossyrock runner about 800 meters from the finish line. Wallace was the first local finisher, taking second out of 55 runners.

During the first games and meets of the year, coaches have a lot on their mind starting with how their athletes will compete.

For the Toledo/Winlock Cross Country team, Coach Brian Layton had to be pleased during the team's first meet at Lewis & Clark State Park Wednesday. The local harriers placed six runners in the top 16 of a 55-person race and dominated five other teams from around Western Washington.

Wallace was clearly unsatisfied with his second place finish to Evan Sutherland of Ilwaco.

"He wasn't even trying," said Wallace of Sutherland's smooth and unstressed running style.

T/W graduated its two top runners last year after an 11th place finish at state, but currently features no seniors among the top seven runners.

Newcomer Jackson Kuzminsky, a freshman, has added quality depth with his early performance to help the team, but Layton is withholding judgment.

"We are happy with the result," said the coach, "but we know there is still a lot of work ahead of us."

Also returning for the T/W girls is Sally Martin, who went to state as an individual last November. The T/W girls have not been able to field a full team of five runners.

The Castle Rock girls placed third in the team race with 64 points. Jessie Mitchem grabbed a ninth-place finish followed by Barbara Millward in 16th. Stormie Beer was 21st, Jordyn Spreadborough right behind in 22nd, while Estephanie Sanchez finished in 30th.

Castle Rock has had no problem fielding a full team, but success is still a ways away as both girls teams were raided by graduation. For the boys, Ben Patrick placed ninth, but the next CR boy was a full 18 places behind.

"It is early in the season and this is a very young team," said CR Coach Jim Oliver. "We had a pretty had hill workout yesterday so some of our kids are going to be a little tired today."

There is a long season ahead with races of far more importance for both programs. September is the proving ground for those still running in November.

On Saturday at the Ilwaco Invitational, Jake Kimball was the top finisher for the Rockets in 17th place.