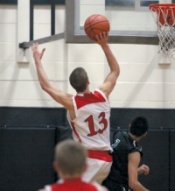 Austin Trafelet (#13) soars above all others for two points against Woodland on Friday night. Trafelet scored 18 points and was second only to Brennan Rakoz’s 25 in Toledo scoring.

It is a high school basketball parent's nightmare: four games in seven nights and two of them 160 miles away over a snow-swept mountain. It is a lot more fun, though, when the kids are as successful as the Toledo boys this week.

Last Friday, the Indian boys took game one in the Wilbur-Ellis Yakima SunDome Shootout against White River. The match-up featured a larger, highly-ranked school against a very successful pint-sized Toledo.

"If you believe in rankings, it looks awesome," said Indian Head Coach Scott Merzoian.  "They were a solid team with players at every position that we had to defend."

14 hours later, the team took the SunDome floor again to play Sammamish, another larger 2A school and notched a 66-53 victory.

Both Brennan Rakoz and Austin Trafelet recorded 24 points as the Indians pulled away from Sammish. Rakoz was clutch from the free throw line and Trafelet contributed 10 assists in the game.

"A lot of good things came out of that weekend," said Merzoian, adding he is always thinking about bigger things in the future. "We stayed in the same hotel and ran through the same routines that we will during the state tournament."

Of course that is just two months away on the same floor, but their next opponent will have something to say about the route back to Yakima.

On Wednesday night, Toledo visited neighboring Castle Rock, who has a resurging team of shooters, largely from the same family. The Rockets came into the game with an 8-2 record and looked to be a formidable challenge.

Castle Rock came out red-hot and held a 32-24 lead at halftime but the Indians turned up the defensive intensity in the 3rd quarter and the CR shooting cooled.

"They hit seven threes in the first half, but we came back and held them to just four points in the third quarter," said Merzoian.

Early in the 4th quarter, Toledo tied the game at 42 and then pulled away for a 56-50 Trico League victory.  Brennan Rakoz had 25 points while Austin Trafelet contributed 20 points.

On Friday night, the Indians finished off the week with a 74-38 trouncing of Woodland in Trico League play. Toledo out-rebounded the Beavers 38 to 15 and out-shot them by 13%. It was a good example of how Merzoian wants his team members to play 32 minutes of every game.

"We have to play the same way every minute of every game," he said. "They have to be aggressive, intense, relentless and all those other adjectives that you can think of. It is not something that you can turn on and off. It is a mentality that you have to have to finish teams off. All of the final eight teams at the state tournament last year had that."

Toledo is now 11-1 on the season and 9-1 in Trico League play. They travel to White Salmon on Tuesday and host La Center on Friday.

It was a tough week for the Toledo girls as they faced the 8th-ranked Castle Rock Rockets and then the 5th-ranked Woodland Beavers.

On Thursday, Casee Rice erupted for 29 points but the Lady Indians played very respectfully in a 56-42 loss to the Trico League's top team. Toledo head coach J.B. Ewers indicated this was Toledo's most well-played game of the season.

On Friday night, Toledo traveled to the Trico's second place team and faced a dominating team as Woodland handed the Lady Indians a 53-14 loss.

The Onalaska Loggers showed they could break a press with a 13-2 run early in the third quarter and led by as many as 22 points in Central 2B League action Thursday night.

The Cardinals went on to outscore the Loggers by 10 points in the 4th quarter, but by then the Onalaska back-ups were gaining varsity experience.

Enrique Hernandez led the Cardinals with 20 points while Damon Hertz and Caleb Rose led Winlock in rebounding with seven a piece.

The Winlock boys are now 1-6 in Central League play and 1-8 on the season will travel to Pe Ell on Tuesday and Wahkiakum on Friday.

The Cardinal girls basketball team lost twice this week as they enter the meat of the Central 2B League season.

On Friday night, Onalaska clamped down defensively for a 57-14 victory. On Saturday, the girls fell to Morton/White Pass 42-20.

"We showed improvement," said Head Coach Scott Ashmore.  "We can't get enough quality shots off. Our defense was better but we struggled rebounding."