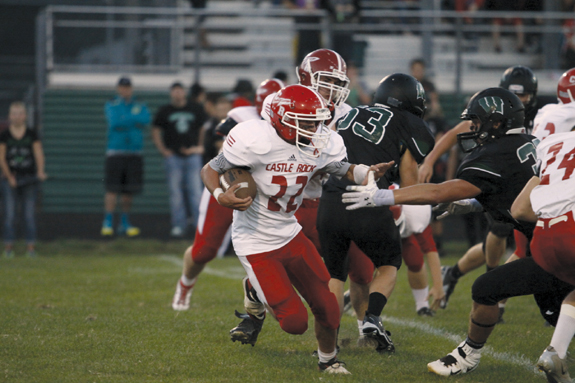 Nate Williamson of Castle Rock tries to crack the Woodland defense during Friday night's 47-7 defeat to the Beavers.

The vaunted Toledo defense couldn't close the deal on Friday as Columbia (White Salmon) scored 14 unanswered points and slipped by the Indians in Trico League play. Taylor Hicks led Toledo in rushing with 92 yards while Kreed Askin added another 73 yards on the ground. Gage Madill went 2 for 3 for 58 yards passing including a 53 yard TD to Connor Vermilyea.

The Indians will host Forks this week in a non-league contest.

The Beavers ran rough shod over the Rockets in Trico League play with a 47-7 thumping. Nate Williamson broke away for the Rockets only score in the 4th quarter. Williamson also had a 40 yard run in the 4th, but in the final stats, the Rockets were held to minus seven yards rushing.

CR travels to Stevenson for its next game on Friday.

For the second week in a row, the Cardinals were held scoreless in a Central 2B league game. Winlock totaled 117 total yards all on the ground. Chance Fisher busted out for 111 yards while 25 additional yards came from sophomore Sean Berry.

It doesn't get any easier as the Cards host Raymond in a non-league game on Friday.

On Saturday, CR dominated the offensive side but fell to La Center in extra time, 1-0. The Lady Rockets out shot the Wildcats 14-6 but could not penetrate the goal. Castle Rock is now 1-1 in the Trico League.

Toledo/Winlock United had a tough start to their season with close losses to Kalama (3-2) and La Center (2-1), then broke loose with a 13-0.

"They had three shots on goal and they scored two goals," said T/W Head Coach Horst Malnaut. "It was the same story in Kalama. We are limiting the mistakes, but they are costly for us. That is the sport of soccer. You can dominate another team, but that doesn't necessarily mean that you are going to win".

Stephanie Yoder accounted for a goal in the Kalama and La Center games and then nearly half of the 13 goals against Stevenson. Michelle Gleason scored the second goal against Kalama.