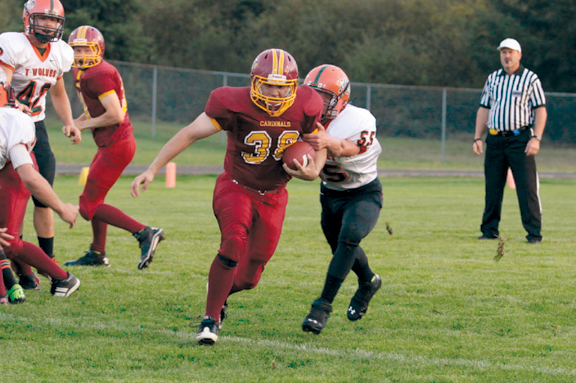 Winlock's Elias Del Campo found some open field for just a few seconds early in the first quarter against Morton/White Pass. In all, the Cardinals were able to muster just 65 yards of offense against the defending state 2nd place team.

Up just 21-7 after the half, and the Cougars on the move, CR head Coach Ben Suhrbier said he was sweating. The Cougars accepted the second half kick-off and began methodically driving down the field with the CR defense on its heels.

"My biggest worry was when we gave up that touchdown with 31 seconds left in the half and we were a little lackluster in our coverage," said the coach.

Seton Catholic fumbled near the Rocket 20 yard line on the drive and never really presented a serious challenge again.

"I think we persevered and we didn't give up," said Coach Suhrbier. "We had some good drives and we made a couple of mistakes. At halftime, we talked to the boys and they were a little bit more aware of what they need to do."

In the third quarter, Mason Klingberg opened up for a 28 yard TD run and then added a second 22 yard scoring run in the 4th quarter before the younger players came in to mop up.

"The great thing about Mason is that if there is nobody open, he has the legs to run the ball. Our bread and butter guys are Nate Williamson, our tailback and Lammer, (Chase Lam) our full back," interjected the Coach.

Williamson scored the first three TDs for CR and accounted for 69 yards while Lam tallied 86 yards on the ground.  Klingberg led the Rockets in rushing with 99 total yards.  The Rockets gave up 173 yards of total offense to Seton Catholic while piling up 311.

The Rockets will go on the road next week to take on Woodland.

Defense set the tone early for the Indians as they started the season with a 24-6 Trico League victory over the Bulldogs.  Daniel Echtle began the game defensively with an interception and a 93 yard touchdown return.  The Indians rolled up three more scores through the evening.

"We played really sloppy, lots of penalties, arm tackles, missed blocked, running backs missing the holes and poorly executed plays but with all that we won," said Toledo Head Coach Jeremy Thibault.   "I think our young kids grew a lot and got a better understanding of the speed varsity football games are played. We rotated several kids and got them game time experience."

Taylor Hicks ran for two TDs while Kreed Askin chewed up 107 yards of rushing putting the Indians in position to score. Mason Gaul added the final score for Toledo.

The Indian defense limited Stevenson to just 46 yards rushing, and gave up a modest 150 yards passing.  Dakota Robbins and Connor Crawford both captured interceptions for the Indians' defense in addition to the Echtle pic-six in the first quarter.

"I'm super excited for the future,” said Thibault. "Only two starters on defense were seniors, which I think will be the strongest part of our team."

Toledo travels to White Salmon this Friday for another league game on the road.

While they love their coaches, Winlock is still struggling to find enough good athletes to field a solid football team.  That was quite apparent as the Timberwolves of MWP skillfully ran over the Cardinals 68-0 in 2B Central League play on Friday night.  Morton-White Pass won the 2B Central in undefeated fashion a year ago and were stopped only in the state championship game.

"They graduated only two guys from the line," said an MWP insider. "All the skill guys are returning and anything less than a state championship will be a disappointing season."

Winlock continues their season at Wahkiakum next Friday.