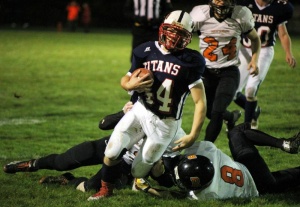 Titan head coach Josh Fluke has been able to take two separate student bodies, assembled a new coaching staff, and has possibly united two communities, (at least on the gridiron), with a decisive win over Rainier.

"At the beginning of the season I didn't know what to think, putting these two teams together. I didn't know how they would actually clash together. But they came out and acted like they had been playing football forever with each other," said Fluke of his 40-man roster.

As been the style of the PWV Titans, everybody shared the load. Cycling in and out quarterbacks who had plenty of options to either push the ball through the line or make a few quick fly-bys; the Titans closed the first half up 21-0. Junior quarterback, Aidan Arrington feed the ball to his two workhorses, Seth Flemetis and Kaelin Jurek who took advantage of the initial possession of the game. The running duo were later joined by Trevor Cook, and the three pressed the game to a third and goal just midway in the first quarter. But getting the nod to take it across the goal line, senior Chase Flemetis would get the call.

In all, four Titans would be holding the ball as the team rallied through the contest. Jurek scored twice, each from short distance out; Cook receiving a pass from Jason Fluke and Arrington would make the final score on a keeper from three yards out.

The Mountaineers did make the Titans stand up and notice during the night, but could not find a way to break through the Titan defense.

"The score is not indicative of the game tonight," said Fluke, "they are a hard hitting football team and made some good yardage."

Rainier was successful in holding PWV in the third quarter not allowing a score. But it would be the two fourth quarter touchdowns that would close the door on the Mountaineers.

The win places PWV into the first round of District IV play and a trip to Aberdeen with a stop at Stewart Filed. The Titans will be tested quickly in the first round of the District Tournament drawing the Hyaks of North Beach (9-0). The match up is scheduled for Nov. 15 at 1 pm.