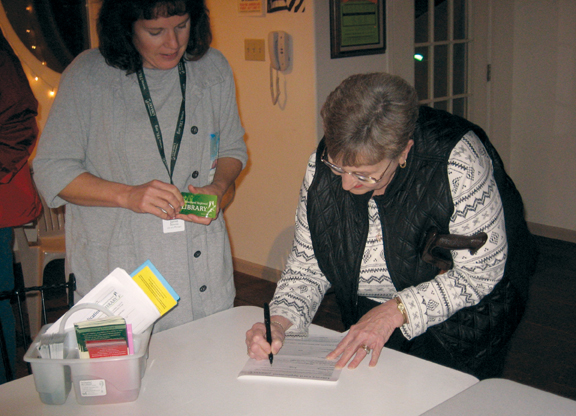 Toledo resident Nancy Enger (right) was the first to fill out an application for a Timberland Regional Library Card, assisted by Winlock Library Manager Jamie Allwine (left), during a Nov. 20 celebration of annexation into Timberland’s district.

Supporters of a Toledo Library gathered at the Morgan Arts Centre Nov. 20 to celebrate the successful passage of annexation into the Timberland Regional Library (TRL) District.

Approved by 66 percent of local voters during the Nov. 5 General Election, annexation represented a significant victory for those who have been promoting the idea of establishing a Toledo Library, specifically in a downtown building owned by Pat and Bill Caldwell.

But annexation has also enabled TRL to begin a service point analysis, commissioned by Timberland officials the same day the party was held, to determine if and how TRL can establish a presence in Toledo.

While options such as a book drop-off, a kiosk with books on reserve, and a full library have been frequently discussed, other options have been materializing as well in the last few weeks.

Winlock Library Manager Jamie Allwine, who was at Toledo's celebration, told those in attendance the large margin by which annexation succeeded has shown TRL officials the desire and enthusiasm Toledo residents have for a library, and said some unconventional options may be placed on the table in an effort to serve the community.

"This town and its need for a library are completely unique," she said, stating one option may be to have a full library operated primarily by volunteers, with TRL staff from Winlock coming twice a week to lead events and programs.

Allwine said the first step in the process remains completing the service point analysis, but said residents are free to ponder creative solutions to serve the community through TRL's limited resources.

"If Timberland is open-minded about this," commented Mike Morgan, "we could come up with all sorts of ideas."

Morgan, an organizer with vision:Toledo, was among those who lauded the efforts of volunteers that night, extolling the those who went door-to-door promoting annexation, as well writing letters to local newspapers.

He said the work of the community is not yet done, adding it now falls on Toledo residents to sign up for library cards through TRL branches such as Winlock and Salkum, and to make such great use of those cards TRL will understand the need for a library in Toledo.

Toledo residents have been officially eligible to sign up for TRL cards since Tuesday, after the elections were certified, and can do so at any TRL branch without any fees.