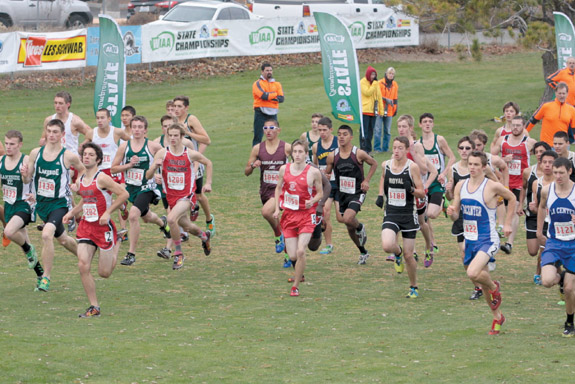 Toledo/Winlock runners Ashton Fraser, Forest Wallace, Wesley Kuzminksy, Jerry Murphy and Isaiah Johnson run with a small portion of the 1A runners at the WIAA State Cross Country Championships in Pasco on Saturday.

The Toledo/Winlock boys and Sally Martin participated in the biggest and final race of the cross country season during the WIAA State Cross Country Championships held in Pasco on Saturday.

As an individual, Martin placed 88th in a race of the 138 1A best runners in the state.

The Toledo runners found themselves challenged in a race of 144 runners. Ashton Fraser was the first Toledo runner to finish in 60th. Forest Wallace was next in 71st while Jackson Kuzminsky crossed the finish in 115th place. Jerry Murphy finished in 124th and Isaiah Johnson rounded out the scoring for the team with his 133rd place finish.

This team knew going in that competing in the upper levels of state competition was going to be a tough road but there is more to cross country than the contest. The aura around competing at the state championships is enough to bring a team together, but the time together creates memories that won't be forgotten anytime soon.

The team took an extra day, and they took time to work out at high elevation at Dog Lake, near White Pass.

"I decided to be a goofball and took off my shirt," said team member Jerry Murphy. "We had about three to four inches of snow where we were running."

"We has a snowball fight," laughed freshman Kuzminsky.

"We had a great experience," said junior harrier Wallace of the overall experience at the state competition. "Jerry had a really good race (he enjoyed a personal best of 19 seconds). State is a make or break race. You will do either really well or you will do really bad. I felt that we all got closer as a team the more time that we spent with each other. I would say we had a great time at state no matter how we did. We all knew that we had a family to come back to."

The word family kept coming back after the race on Saturday.

The coaches, Brian Layton, Mike Christianson and Seth Martin also got a lot of praise from the team. From a week-long camp in Montana last July to the 6:45 a.m. workouts at Lewis & Clark State Park this fall, their dedication had a lot to do with the success of the team and program.

"I had a lot of fun," said Kuzminksy. "The bus ride and hanging out with the coaches. They made it really fun."

Sometimes dedication is not what it takes to coach teenage runners.

Wesley Kuzminksy had the potential answer for that question: "The coaches were hilarious."

So noted as one of many ways to coach a cross-country team to state for five years in a row.