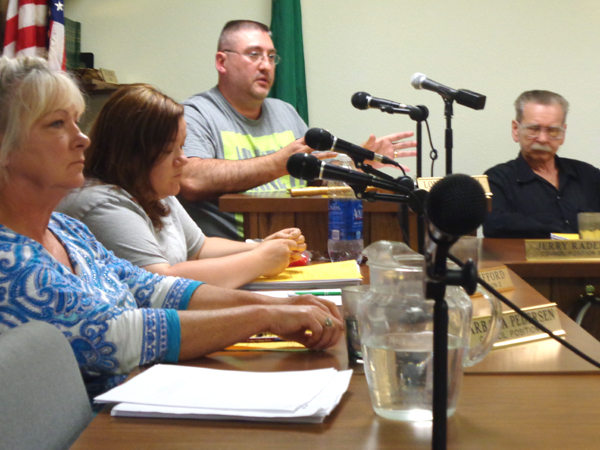 Winlock Mayor Lonnie Dowell (center) explains the potential "trickle-down" effects of contract for police coverage during Monday's meeting of the Winlock City Council, as a dissolved police department would cause the city to re-distribute certain fixed costs to other city services, potentially increasing the cost for services passed to residents. Though the council was asked to vote on whether or not to dedicate their efforts toward a police contract that night, the motion was rejected on the grounds officials need more time to examine their options.

Members of the Winlock City Council failed to pass a motion Monday night seeking to pursue a contract for police services as most officials say they need additional time to consider their options.

Though Council Member Aaron Mummert had put forward a motion to officially dedicate Winlock's efforts toward a police contract, a proposal he has strongly advocated for since last year, the vote to do so was tied, with Mayor Lonnie Dowell supporting the no-votes, stating he felt the council was not in a position yet to make an informed decision on the matter.

"I oppose until further information is collected," said Dowell when casting the tie-breaking vote. "We will table this until the next meeting and we will have additional information and we can vote on it then."

Supporting the motion with Mummert was Council Member Sarah Gifford, who said she feels the potential for added patrol coverage detailed in a contract proposal from Toledo would be a net benefit for the city, while Council Members Jerry Rader and Barbara Pedersen opposed the motion, both stating they desired more time to review the information before them, while also favoring the idea of retaining a Winlock Police Department. Abstaining from the vote was Council Member Sam Patrick who, as a police officer for Toledo, has withheld his input on the issue to avoid a conflict of interest.

Winlock has been actively exploring the possibility of contracting with another agency for police coverage since Mummert broached the issue with the council last October, and began in earnest after Police Chief Terry Williams announced his retirement March 31, effective June 30. So far, Toledo has offered 20 hours of active coverage per day for $196,000 per year, while the Lewis County Sheriff's Office has offered 24/7 coverage for $250,000 per year, compared to 10 hours of active coverage the city currently provides for $250,000 per year.

While examining their options, officials have been informed by city staff they would still need to pay for certain non-transferable costs out of the city's budget, around $53,000 worth, if they were to contract with another agency, as costs related to insurance, office supplies, utilities, staffing and other general expenses shared across city departments will remain regardless of the council's preferred police option.

During Monday's meeting, it was further clarified these remaining costs, when spread among the remaining city departments, particularly public works, may lead to increases to sewer and water rates for local residents, as the increased costs to these departments would need to be passed on to utility customers.

"By contracting and not having [a police] department, it will impact the wastewater treatment plant... It will add even more expense to that department," said City Clerk Theda Curry, stating the estimated impact on rates would be around $1 per month, if the city contracted with Toledo, adding certain expenses are difficult to predict and exact figures will not be known until the end of the year.

At the time of the meeting, figures estimating the impact on other departments of a contract with the Sheriff's Office were not available, with Curry stating she had not been directed by the council to compose such figures. It is estimated the impact would be greater, as the proposal from the Sheriff's Office would dissolve Winlock Municipal Court, adding more non-transferable costs to be shared among remaining departments.

Also expected to result from a contract for policing would be negotiations with city's bargaining unit, as a reduction in hours for either the police department clerk or the court clerk would necessitate involvement with bargaining unit representation, according to City Attorney Erin Hillier.

Present at the meeting and speaking on behalf of the bargaining unit was Mike Werner, of Teamsters Local 252, who confirmed employees would expect to negotiate any changes in hours or responsibilities for its members, adding the union would expect the open positions in the police department, should a contract be approved, would remain open until such a time as Winlock saw fit to fill them again.

It is expected the Winlock City Council will again discuss, and possibly act upon, police options during their June 22 regular meeting. If a police option is not finalized prior to June 30, Dowell has indicated the city will seek the help of the Washington Association of Sheriffs and Police Chiefs to find an interim chief, while both Toledo and the Sheriff's Office have made themselves available for coverage during such a time.