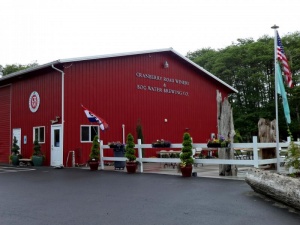 Born in Iowa and raised in the bay area of California, Tiffany fell into the cranberry wine business by chance. After moving to Bonney Lake near Puyallup in 2007, he had a friend who knew the Warras, cranberry growers in Westport. As a hobby, in 2008 he, his friend, and a few others decided to “tinker” around with the berries, using Google and some how to’s on the Internet.

Within about a year, Tiffany had a substantial amount of interest in his wines. “One thing led to another where everybody was telling us that we should start selling it, so we decided to go ahead and get our license and start it in my garage,” he said. That was in 2009.

After getting licensed, Tiffany’s customer base continued to increase. Within a couple years “the popularity was growing to the point where we either needed to decide to go big with it or to stop doing it because it was becoming too much – more than a hobby but yet not enough to really make any money at it, unless we decided to go bigger. So we, my wife and I, decided just to go ahead and pull the trigger. And here we are.”

He purchased the property where the winery is today in 2011 and within the last three years the tasting room has bloomed into a family-friendly gathering place, especially during the summer months. His wines are currently distributed across Washington and Western Idaho.

Tiffany still gets cranberries from the Warras and now also the Maybens. The winery currently makes two types of wine, Cranberry and Cranberry Cinnamon, but they will be adding sparkling versions of these two types this month. The debut of the two sparkling wines will be during the festival celebrating the 100 year anniversary of Westport. The winery will be hosting an event to introduce the new wines and celebrate the anniversary, but the date has not yet been set.

Cranberry wine is a quite uncommon type of wine. “It’s unique because there’s not very many people who do a cranberry wine. So it’s not what people expect,” Tiffany said.

“A lot of wineries who do make them, make them from concentrates,” Tiffany said of cranberry wines. “We make them from the whole berry, the assembly no different from doing a regular grape wine. It makes a difference on the flavors.”

The taste of the wines are distinctly cranberry, though, said Tiffany. “It definitely has the tartness of the cranberry, but by adding the other berries to it, it mellows it out. . . It’s pretty well-balanced. It’s not too sweet, it’s not too tart, it’s just kind of in the middle of the road.”

The process of making cranberry wine is very similar to that of making grape wine, Tiffany explained. “We’ll actually pick up the totes of cranberries from the growers when they’re harvesting. First, before we do anything with them, we’ll actually take them into cold storage to be frozen, because by freezing the berry it actually breaks down the cell walls on it and you get about 20% more juice out of them than you would by processing them right off the field.”

Next, the cranberries are cleaned and separated from any twigs or dirt. From there, they go into a crusher to extract the juices. Then all the ingredients, including the sugar, water, different berries, and yeast go into the fermenter, where it ferments for about a week.

After the fermentation finishes, “we just get the pure juice itself and let it sit in the cold storage tank for a little while to let all the sediments drop out of it. And there you go.”

Tiffany and his family moved to Westport with the vision of creating a family-oriented business. “When we decided to up the size and we wanted a tasting room, why not have it be here nearby where all the cranberries are growing anyway? We wanted to be part of the community here. It just seemed like the smart move.”

“[My wife and I] want to have something that we enjoy doing, and that people enjoy. . . Our goal for the winery is to have a family atmosphere, so everything is based on the whole family, not just adults coming in to have the alcoholic beverage. We have live music every Saturday during the summer, family events that we plan on doing – we want it to be a family oriented atmosphere because of our kids.” Tiffany and his wife have two kids, aged four and two.

This summer, in addition to live music which is usually country, bluegrass, or classic rock, the winery will have volleyball nets, horseshoe pits and areas for the kids to play and climb on. He also plans to bring in ponies for rides for children.

A noteworthy change at the winery is its new kitchen, which will be used to cook woodfire oven pizzas, hot sandwiches, calzones, and other foods. The kitchen was just installed two weeks ago and Tiffany looks forward to being able to feed his customers, who had expressed the desire for food options.

The next big event that the winery has planned will be an Independence Day celebration on the fifth of July. Three bands will be playing live music throughout the day and a fireworks show will conclude the evening.