Winlock band festival draws students from all over region 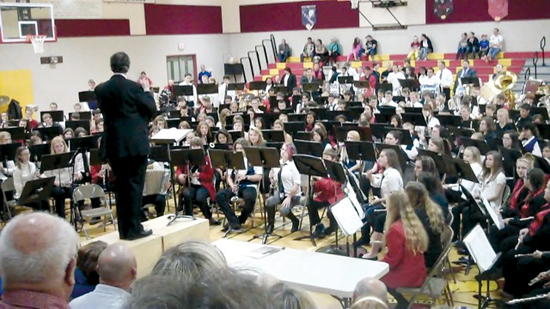 As host school, Winlock took care of meals for the 260-plus students (doubling the student body of the school for the entire day) and held an evening concert in the gym.

In the morning was held the contest portion of the festival, where each band performed for adjudication. The guest adjudicators were Rob Davis, instrumental director at Lower Columbia College, and John Swecker, retired band teacher from the Longview School District.

The evening concert featured the host band, Winlock, and the two trophy bands, Onalaska and Adna. Also, the Honor Band performed and as a finale.

Winlock’s own music instructor Karl Scarborough was privileged to direct the Massed Band in a medley from the Lion King, during which students performed for a packed house.
"I appreciate our parent boosters, Superintendent Shannon Criss, HS/MS Principal Brian Maley, teachers and staff at Winlock for their support to make this happen,” stated Scarborough. “I especially appreciate our great Winlock Band and Choir kids who did a lot of foot work to help make this festival run smoothly.”