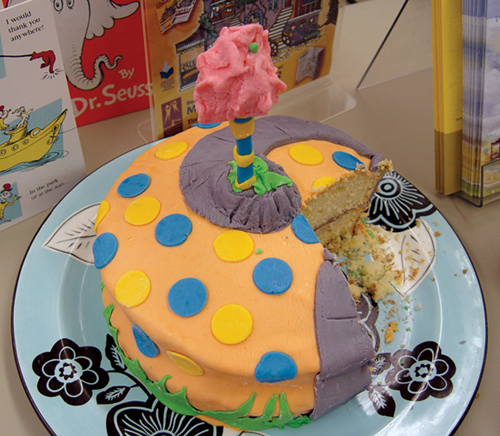 A cake baked by Standal of Horton holding the clover upon which the Whos lived in Horton Hears a Who. She said she found the idea of Pinterest.com and spent the previous night working on it.

Guests and staff at the Winlock Timberland Library celebrated the birthday of Dr. Seuss Saturday, the first event to kick off the Family Read-Aloud program.

Organized by Library Associate Becky Standal, the event was one of several to celebrate the life and works of the beloved children’s author, who was born March 2, 1904.

In addition to a display of Seuss’ works and as well as games and crafts throughout the afternoon, donations were gathered for the Winlock Food Bank through the Read and Feed program. Donations of non-perishable foods were gathered under a sign reading “Unless someone like you cares a whole awful lot, nothing is going to get better. It’s not.”

Other upcoming Family Read-Aloud events will include The Mimic Clinic with Charlie the Noise Guy this Saturday, Wacky Wednesday March 20, Paint Like Eric Carle April 2-4, and Junior Page Turners April 11. For more information about these and other ongoing library events, feel free to call (360)785-3461 or visit the library at 332 NE. First St. in Winlock. 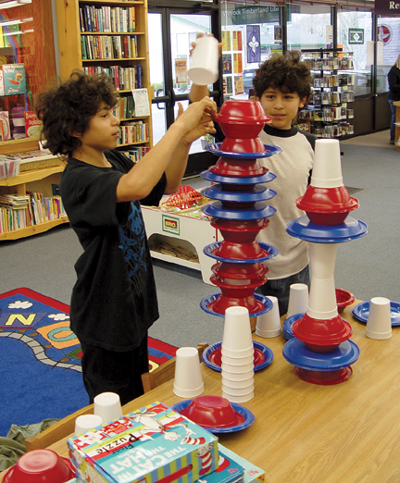 Brothers Jason Tracy (right) and Bryan Tracy (left) attempt to build a structure of plates and cups taller than themselves. The odd building materials were chosen to help participants recreate the oblong and whimsical buildings from Seuss’ stories. 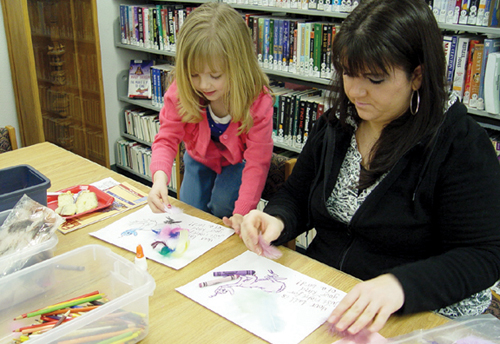 Michele Morehead (right) and four-year-old daughter Kaeleigh Swarthout (left) decorate their own colorful renditions of Gertrude McFuzz, a young bird worried about the size and number of her tail feathers from Yertle the Turtle and Other Stories. 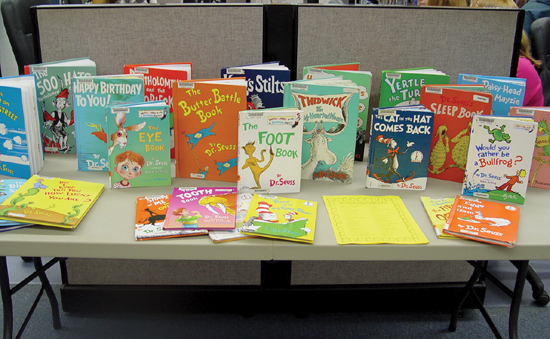 A collection of works from Dr. Seuss (born Theodor Seuss Geisel) on display at the library, showcasing some of the more influential of his 46 children’s books published throughout his lifetime. Since his death in 1991, libraries and schools across the nation have named exhibits and buildings after Suess, who was even inducted into the California Hall of Fame in 2008 by Governor Arnold Schwarzenegger.