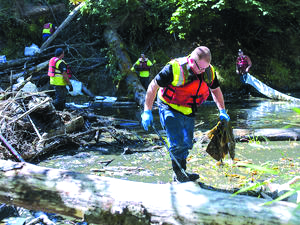 The Washington Department of Ecology has directed a Winlock company to repay the state $30,887 for the cost of responding to the 2015 August oil spill caused by the warehouse fire at 803 NW Kerron Avenue. The oil spill killed thousands of small salmon, trout, and other fish. Olympic Trading Corporation also has been issued a $1,000 fine for spilling oil into state waters. Olequa Creek, the waters in which the oil entered, is a tributary to the Cowlitz River.

For over two weeks after the fire and spill, the Department of Ecology and some other environmental protection agencies oversaw the cleanup and road to recovery of the Olequa Creek. After any oil spill response, Ecology is required by state law to follow up with enforcement, including reimbursement for state expenses. This led to the fine of $30,887 to the Winlock company.

The company and its insurance have paid more than $200,000 to contractors for the response, clean up and demolition of the burned warehouse.

The 1,500 square-foot warehouse was located at 803 NW Kerron Ave. and contained a variety of grocery items, including 14 pallets (1,130 gallons) of vegetable oils. Containment berms constructed soon after the fire allowed contractors to collect and remove 65,500 gallons of contaminated water and 25 cubic yards of oiled sorbents and contaminated soil.

"This was a devastating event for the owners of Olympic Trading Company and the Winlock community," said Jim Sachet, spill response manager for Ecology.

"Unfortunately, the runoff from the fire impacted about three-and-a-half miles of Olequa Creek." Investigators have not found a cause for the fire. Though it is believed for the fire to have been accidental, the state must still be reimbursed.

The U.S. Fish and Wildlife Service is considering a separate assessment for the value of damages to the environment. The company has 30 days to appeal the penalty and cost reimbursement.