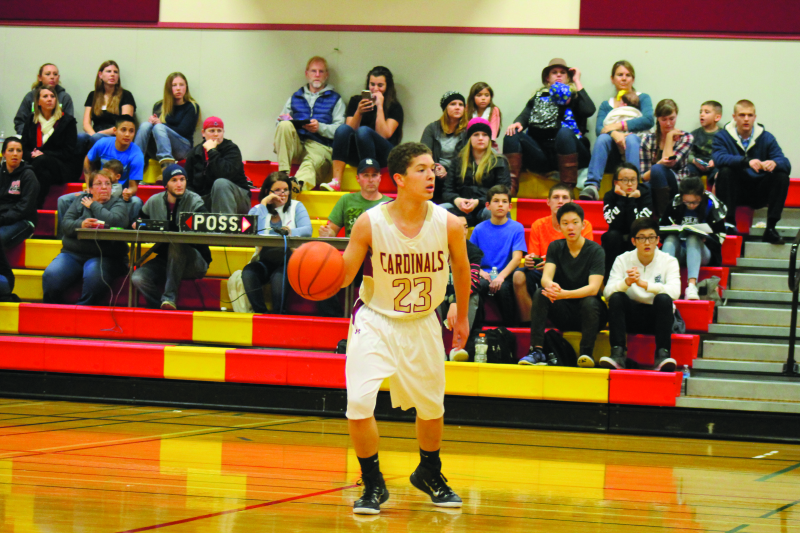 Photo by Kennedi Collins - Nicholas Patching looks for an open team mate under the hoop.

Following the girl's name from earlier in the night, the Winlock boys began their basketball season in a game against Northwest Christian.

Starting the game Northwest Christian immediately jumped ahead of Winlock as they took down the court to score the first two points of the night. A few minutes later Winlock added a score to their board after a successful foul shot. Following only moments behind this point Northwest returned with a three pointer. Now knowing what to expect Winlock returned the favor with a three pointer as well. The quarter continued with play for play until Winlock ended in the lead with 14 to eight.

At the start of the second quarter Northwest returned to the court immediately after the buzzer before Winlock. Seeing that Winlock was not ready to reenter, Northwest threw the ball in and scored before Winlock could react. The quarter continued in Northwest's favor as they scored point after point. With four minutes left of the quarter, Winlock fought their way back into the game. The quarter concluded with the teams tied at 23 to 23.

Moving into halftime the cheerleaders performed their routine for the crowd. After their routine the Halftime Pop Shoot was held before the teams returned to the court.

Continuing into the second half Northwest made their usual first points. After a few plays by Northwest, Winlock came back with four more points. With five minutes left of the quarter Northwest made two free throws before Winlock shut them down and left them in the dust with a score of 41 to 29.

As the teams came back to the court to finish the game, Northwest scored the first points again. The quarter continued with intense plays from both teams as they made back to back points. As Northwest would score points, Winlock would return with points as well. Back and forth the teams battled until the buzzer rang with the victory going to Winlock with 53 to 48.

To support the Winlock boys at their next game, they will be playing December 8th against Morton-White Pass in Morton at 7:00 pm.