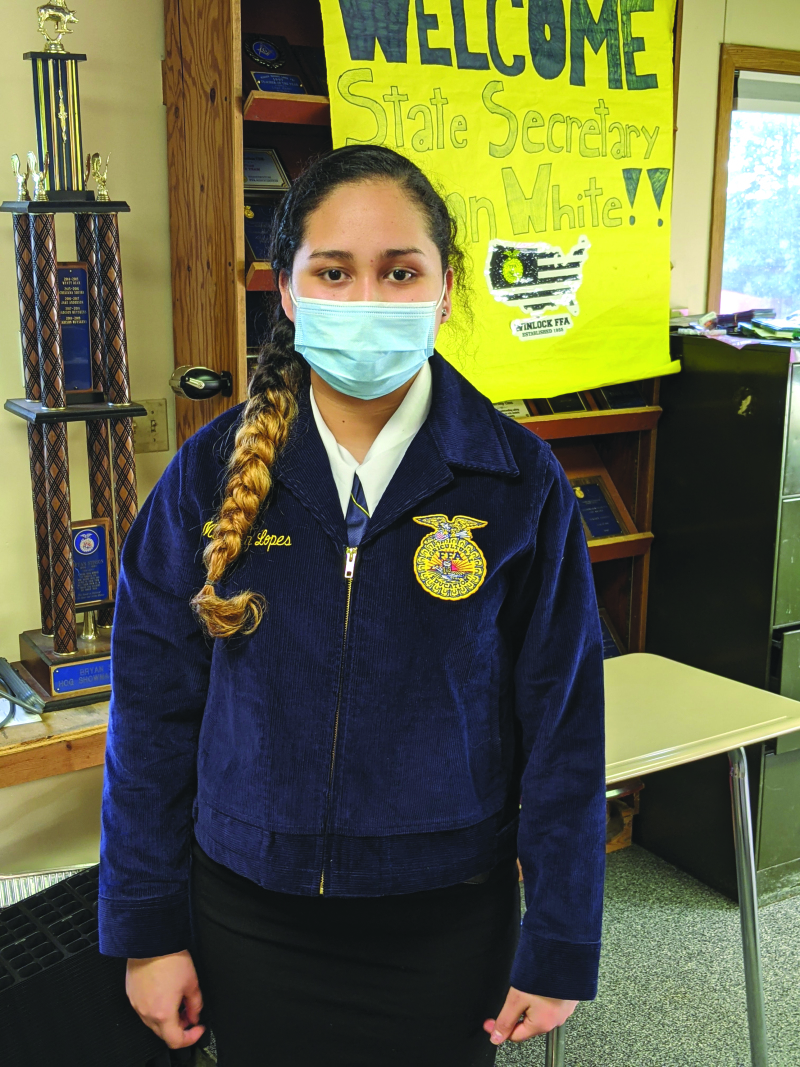 Winlock FFA students in the Conduct of Chapter team recently finished in the top eight at the state competition. The students participated in learning Parliamentary Procedure, also known as Roberts Rule of Order. This is a process many governments use to facilitate their meetings, it gives order to each meeting in a more formal process.

Steve Mahitka, FFA advisor stated, "Students learn the basics of Robert's Rules of order and how to proficiently use Parliamentary Procedure. They will learn how to make a motion, amend that motion, and debate a motion so that all voices can be heard. This is an important skill that many professionals use to run meetings." Each student will learn what is required of a team, Mahitka continued, "One of the most important skills they will learn is how to work as a team to accomplish a task. They are using Parliamentary Procedure but they have to understand how they can work together to tackle the challenge of the main motion that they have to work with and the other motions they are assigned to accomplish the challenge within the given time frame."

One of the important issues of Robert's Rule of Order is that it is not easy to learn, as Steve Mahitka stated, "Learning this will begin as a frustrating process but will turn into a lesson and experience that you will cherish and enjoy being able to accomplish." After time, students learn the process. The students accomplished a lot at state, per Mahitka, "My students learned how challenging this process can be. They faced a new challenge each time they competed and in doing this they were able to create a sense of accomplishment that they did not realize they could overcome. They had to work with the need to compete over Zoom and this taught them to speak better along with the process of running through Parliamentary Procedure."

Selena Galarza, 8th Grader wrote the Spanish FFA Creed and placed first in state. When asked why she wrote the creed in Spanish she stated, "I wanted to see if I could do it," and she did. She placed first and stated her feelings when she won. "I was super emotional, I couldn't believe I won state. I thought the other ones who had done it before had more of an advantage."

Other students discussed what they learned, how they can use it in life and what was the funnest part.

Justin Allman stated, "I learned how to speak properly in an organization. I can use it later to get a job or in FFA. I enjoy it before I get to hang out with friends and learn."

Lincoln Ruiz said, "I learned specific duties for each officer. I can use this if I am in a state position and I enjoyed the debate process."

Alexis Shepardson mentioned, "I learned how to be independent and confident in my answers. It does matter if I have my own opinion. The skills you learn you can use in business anywhere. I got to meet new people and interact with other FFA members. We always had a group bonding moment."

"I learned how to debate and how to do a job interview, '' said Lacey Allen. "I can use the skills in more FFa events. After state, we had our signature snacks, "tortilla chips and salsa, along with freezer burned chocolate ice cream." That just doesn't sound appealing but students seemed to really enjoy this aspect of the competition.

"I learned how to communicate to get my point across," Taylor Ward said. "I can use it if I become a state officer, FFA or any other job. The opening and closing statements were fun, we memorized them and can have fun with them."

"I learned how to properly debate and work as a team," said Natalie Cardenas. "I can use this skill when I debate someone else. Hanging out with the team afterwards." She also stated, "I would recommend this class, yor public speaking can improve a lot especially if you are shy."

Congratulations to the Winlock FFA team for placing in the top eight and Selena Galarza for placing first in state. We look forward to seeing what you can do in the future.