Wood on the Willapa 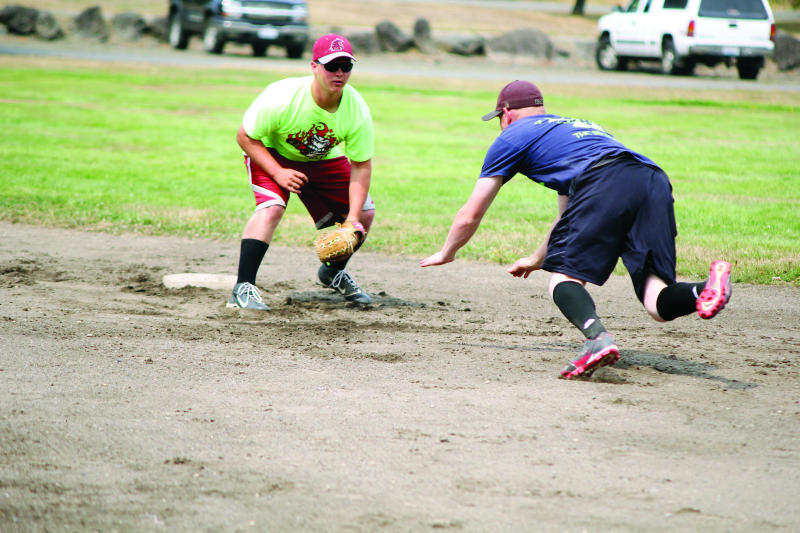 Playing Under the Influence Brett Westcott dives for second base as Balls Deep shortstop Richard Ashlep covers the base. Westcott was caught trying to steal.

During the Willapa Harbor Festival the third annual Wood on the Willapa coed softball tournament had a repeat winner as Balls Deep took the championship game over Playing Under the Influence 15-2.

The rivalry had already been established between the two teams, and BD was the defending 2014 festival champion and they were running through the tournament undefeated.

PUI had to take the brunt of the challenge falling in the initial rounds and having to keep hot bats and a strong defense to get back to the final game.

BD was fresh as they took the field with home team advantage and PUI had just finished a loser out game beating Ice Cold Pitchers.

The pitching of BD kept the balls in the air for PUI batters and the outfield of BD just picked them out of the air through the first three innings. The bats of BD were focused and they were able to establish an early first inning lead 2-0. They brought home another runner in the second and the game started getting heated.

PUI was able to reach the bases during the third inning but was unable to bring their runner home, the defense of PUI also put a halt to any more runs and blanked BD in the inning.

The fourth inning would be the difference in the game as BD held PUI at zero and was able to establish a larger gap making four runs going up 7-0, and then by 10 in the fifth.

Understanding their situation PUI got runners on during the sixth and brought home a pair making a dent in the BD lead. BD did not lighten up and with the established rule of girl walks (option) after guy walks, loaded the bases and was able to garner another five runs closing their scoring at 15.

At the top of the seventh inning it looked like PUI might have caught a break as BD pulled their starting pitcher with one fresh off the bench. But with the speed of the BD outfield and the strong defensive infield, PUI could not find any hole to exploit.